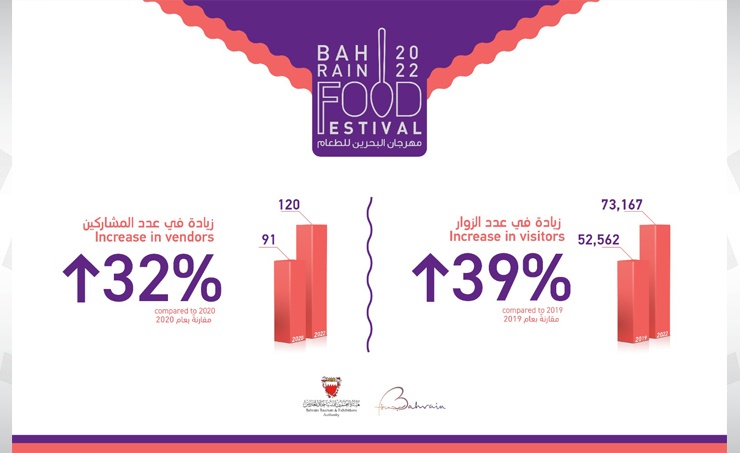 Manama, Mar.26 (BNA): The Bahrain Tourism and Exhibitions Authority reported that the Bahrain Food Festival, which is currently taking place in the Bahrain Harbour, welcomed 73,167 visitors in the first seven days of its launching, from Saturday 19 to Friday 25 March, representing a 39% increase over the same festival in 2019.

This increase also represents 187% of the same period of the festival in the year 2020, when the number of visitors during the first week of the festival reached 25,420, taking into account the conditions of the Covid 19 pandemic at the time.

Noting that the authority did not organize the festival in the year 2021 due to the same health challenges imposed by the pandemic.

According to the Tourism Authority, these numbers are expected to increase during the second week of the Food Festival, which will conclude on April 1st, due to the festival’s popularity, improved weather conditions, and the desire of more people, particularly families, to visit before the holy month of Ramadan.

Dr. Nasser Qaedi, CEO of the Bahrain Tourism and Exhibitions Authority, expressed the authority’s happiness in achieving this success, adding that everyone is a partner in this accomplishment, including citizens, residents, and tourists, as well as participating restaurants that succeeded in achieving good sales.

Dr. Qaedi stated that the Food Festival’s large turnout reflects the state of recovery of Bahrain’s tourism sector and serves as an example of the sector’s flexibility and vitality, as well as its ability to return to previous growth rates, if not exceed them, and to enhance its role at the forefront of promising sectors in the esteemed government’s economic recovery plan, which was announced last November.

Visitors to the Bahrain Food Festival are currently enjoying more than 120 restaurants, serving various types of food, drinks, and desserts.

The “Cooking Corner,” which features several well-known Bahraini chefs preparing and cooking various sorts of cuisine in front of the public in a unique interactive setting, is another highlight of this year’s food festival.

The current session of the Food Festival will also feature a wide range of events and exciting activities, as the festival includes Bahraini artists who will perform a variety of musical and artistic acts.

Visitors also will have access to a recreational area as well as a children’s play area. Raffles for prizes are also held throughout the event in collaboration with hotels and restaurants around Bahrain.