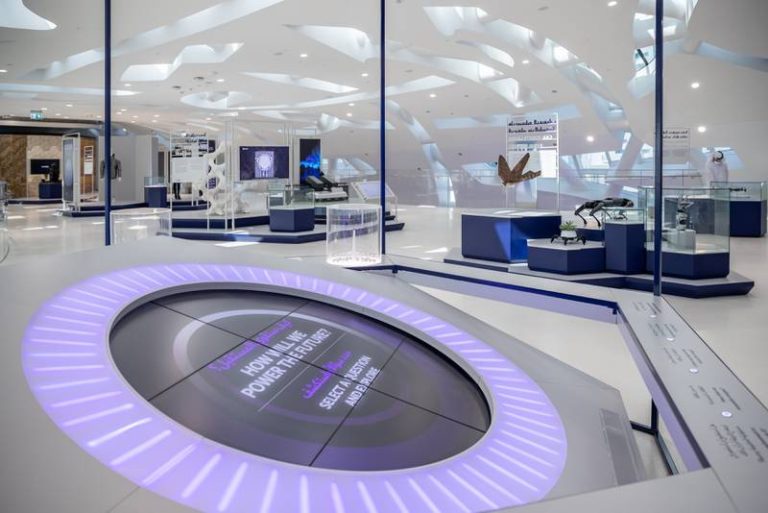 Dubai’s Museum of the Future has signed an agreement with Dubai Electricity and Water Authority to showcase technology related to the future of environmental sustainability and renewable energy.

The partnership aims to “pave the way for constructive research that helps provide solutions for today’s ecological challenges”, a joint statement on Monday said.

It also intends to promote Dubai’s position as a city that sets a benchmark for low-carbon urban societies and sustainable development.

“Through this partnership, we will work to select the best innovations and technologies to display in the museum … we will work to support the government initiatives to contribute to making Dubai the smart city of the future, in addition to discovering more future technologies,” said Saeed Al Tayer, managing director and chief executive of Dewa.

Dewa has also built a solar power plant that supplies the museum, which opened in February, with clean energy.

This has contributed to the museum being the first in the Middle East to apply for the platinum rating in the LEED [leadership in energy and environmental design], the highest ranking for green buildings worldwide.

The Museum of the Future was inaugurated by Sheikh Mohammed bin Rashid, Vice President and Ruler of Dubai, in February.

The 77-metre-tall architectural marvel houses a series of interactive exhibitions that give visitors the chance to experience future technology and trends. Spanning an area of 30,000 square metres, the pillarless structure is also promoted as a novel global intellectual centre.

“Dewa’s captivating experience at the museum will introduce visitors to future innovations and concepts related to the production of clean energy and the transition to a green economy,” said Khalfan Belhoul, chief executive of the Dubai Future Foundation.

The partnership was announced at the museum’s ‘Tomorrow, Today’ exhibition, which showcases existing solutions and concepts that demonstrate the application of advanced technology in the fields of renewable energy and sustainability. It also focuses on other key areas including space, health, cities and technology in the near future.

In June, the museum teamed up with Dubai’s Roads and Transport Authority to reveal what lies in store when it comes to the future of travel. In May, it announced plans to launch its first non-fungible token (NFT) collection — ‘The Most Beautiful NFTs in the Metaverse’ — as it aims to develop a range of products on the blockchain.