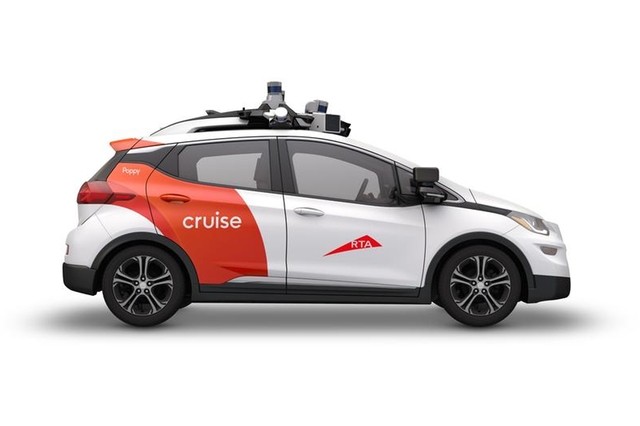 Dubai’s Roads and Transport Authority (RTA) has revealed an extensive collection of smart initiatives, applications, and stations it will showcase at the 42nd edition of GITEX 2022, which commences tomorrow, Monday, at the Dubai World Trade Centre.

At the event, RTA will exhibit the self-driving Cruise vehicle built on the Chevrolet Bolt electric platform for the first time, as well as numerous smart initiatives, including the digital twin-powered smart Dubai Metro station, smart solutions for transferring vehicle ownership, a new generation of taxis, RTA smart apps, among others.

“RTA has outlined an integrated roadmap for the future of self-driving transport. It is moving ahead toward realising the Dubai Smart Self-Driving Transport Strategy aimed to transform 25% of total mobility journeys in Dubai into journeys on various self-driving transport means by 2030. It recently completed an initial phase of preparing digital maps of Jumeirah area for Cruise’s self-driving vehicles,” said Mattar Al Tayer, Director-General, Chairman of the Board of Executive Directors of the Roads and Transport Authority.

“This is in preparation for the launch of the actual service by 2023, rendering Dubai the first city in the world to commercially operate Cruise self-driving vehicles outside the US. Cruise’s next-generation self-driving vehicle, the Origin will be deployed in limited numbers next year to offer taxi and e-hail services. We have plans to increase the number of deployed vehicles gradually to reach 4,000 by 2030.” added Al Tayer.

Through autonomous vehicles, RTA, GM and Cruise envision a safer and less congested future for all, enhancing the safety and accessibility to transportation on a large scale. Such efforts will also advance General Motors’ vision of zero crashes, zero emissions, and zero congestion.

With the use of augmented reality technology, RTA will also showcase the latest technology in the metaverse field, using digital twins to demonstrate Dubai Metro’s rail network. The digital twin platform combines historical maintenance data from the past 12 years of Dubai Metro service with real-time data collected by external data-collection devices to reveal minute details and other critical situations that affect asset lifecycles.

Using historical and real-time data, the platform offers recommendations for improving the asset life cycle, such as changing periodic maintenance schedules and other approved procedures, as well as machine learning and system development to predict possible failures in the future.

Also featured will be the various digital services RTA offers, including the selling and transferring of vehicle ownership through a smart application using UAE PASS without having to visit RTA’s service provider centres. This service will help accelerate the process of completing transactions.

Dubai Taxi Corporation exhibits the new generation of taxi operation systems. The system uses artificial intelligence technologies to streamline taxi shifts by scheduling taxi allocation to drivers on a demand basis. The driver can move directly to the site for receiving the vehicle using smart keys to operate the vehicle. Through cameras fitted on taxis, the system can verify the identity of the driver.

The Dubai Taxi Corporation will also showcase the new generation of taxis fitted with interactive hi-tech screens enabling riders to watch news, games, and others. They also have a new metre that can be operated through the app, which enables the opening and locking of the vehicle, as well as the Alipay service, and a rear advertising screen.

RTA’s stand defines the new concept of the ‘Smart Station’. It employs high technology and innovations in operation, maintenance, and customer services at metro stations. It also exhibits a smart application for coding RTA’s assets for use by inspectors of the Assets Department during field visits to check and update asset information and locations. Thanks to the full display of the coding process, field inspectors can carry out their jobs during their site visits through their mobile phones or smart tablets. Moreover, supervisors will be able to follow the work progress from their offices and follow the status of the coded assets.

As part of the digital channel’s initiative, RTA displays a variety of digital solutions that offer RTA’s services to customers, such as the S’Hail app, a journey planner that supports the first and last-mile strategy. Exhibits include RTA’s main app, Dubai Drive for drivers and vehicles, nol Pay app the unified payment platform that includes nol services, in addition to the display of the chatbot Mahboob.

“RTA has undergone a comprehensive digital transformation and embraced emerging technologies and artificial intelligence as means of boosting productivity and raising operational efficiency. It has also launched new services to improve the well-being of Dubai’s residents and visitors alike,” said Al Tayer.

“Undertaking such plans responds to the directives of His Highness Sheikh Mohammed bin Rashid Al Maktoum, Vice-President and Prime Minister of the UAE, and Ruler of Dubai, to improve the quality of life in Dubai and provide multiple mobility options for residents to make Dubai the best city for living in the world.

“It is also a manifestation of the instructions of His Highness Sheikh Hamdan bin Mohammed bin Rashid Al Maktoum, Crown Prince of Dubai and Chairman of the Executive Council, to enhance Dubai’s competitiveness as a world-leading digital capital and reinforce its profile as a role model in designing government operations and services that enhance customer happiness,” he commented.