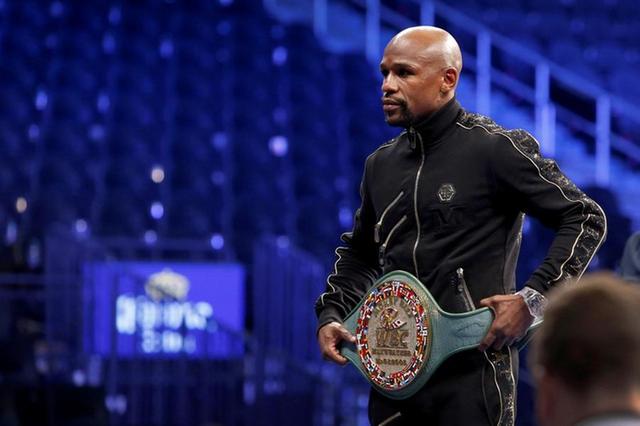 Mayweather had hung up his gloves in 2017 but the 45-year-old American was back in action for this exhibition bout – his first in the UAE.

And the legendary boxer didn’t disappoint fans, who were out in numbers despite a last-minute rescheduling of the event from Dubai to Abu Dhabi.

During the rounds, a smiling Mayweather, with a 50-0 win-loss career record, showed his experience and skills.

“I thank everybody in the UAE. This crowd is totally amazing. The UAE is one of the best places in the world. Don Moore is still undefeated. We are both still undefeated,” Mayweather said.

Mayweather controlled his third exhibition match throughout the eight rounds. At the end of the bout, he promised to fight once again this year in the UAE.

“I waited for this moment for 26 years. I will bring another fight back to the UAE this year,” he said.

Moore, on an 18-0 win-loss record, kept the fight going till the end, endured the punishment from one of the most ferocious finishers in the history of the sport.

“He was the better man tonight,” Moore admitted.

In the other main card encounter between two Brazilians, UFC great and former middleweight champ Anderson Silva and UAE Warriors champion Bruno Machado gave a good account of themselves.

The eight-round clash had a delayed start, and both the fighters took their time before opening up.

In the latter half of the fight, Silva showed flair and landed some heavy shots.

“I am so happy to be here again. I feel this is my second home. Bruno is an amazing fighter,” Silva, the 47-year-old Brazilian icon, said and hinted that he could be part of a jiu-jitsu competition in Abu Dhabi.

“Maybe I will fight in a jiu-jitsu tournament,” Silva added.

And to his credit, Machado, the 35-year-old Abu Dhabi resident, did last until the last round against his icon and one of the greatest mixed martial artists of all time.

“It is very hard to fight someone you love. My inspiration comes from him. Thank you, man,” Machado said after the fight.

Earlier, the night had an explosive start with Badou Jack, former world champion in two weight classes, flooring Hany Atiyo with a brutal left-hand knockout punch inside the opening minute of the first round.

In the only-women’s bout, former champ Delfine Persoon won the World Boxing Council super-featherweight title with a unanimous decision over Elhem Mekhaled. The intense fight went the full distance of 10 rounds and was evenly balanced till the end.

The Abu Dhabi Unity Boxing event was hosted by Visit Abu Dhabi and delivered by FrontRow Entertainment and ITP Live. The fight night was held as part of Abu Dhabi’s Summer Like You Mean It campaign.

The successful hosting of a star-studded event with top names from the world of boxing and mixed martial arts is yet another feather in Abu Dhabi’s cap.

Also, the emirate will be the first in the region to host NBA pre-season basketball games in October.