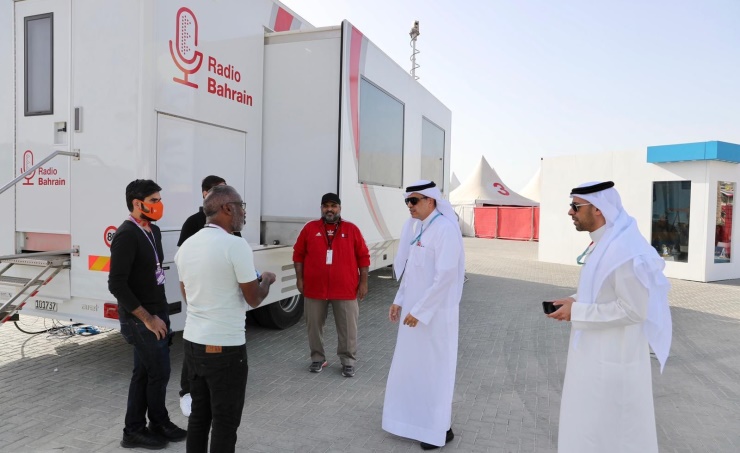 Manama, Mar. 19 (BNA): Information Affairs Minister, Ali bin Mohammed Al-Romaihi, has praised the success of the Bahrain International Circuit (BIC), the home of motorsport in the Middle East, in hosting the Formula One race for the 18th year, amid the availability of an advanced system of organisational, logistical, security and media services.

While visiting BIC to follow up on the media coverage of the 2022 Formula 1 Gulf Air Bahrain Grand Prix, the minister expressed pride in the ongoing cooperation of the Information Affairs Ministry with BIC and the relevant government departments to provide the necessary media and technical services to reporters of local and international media outlets to ensure a distinguished coverage of the international sporting competition and its accompanying events.

Al-Romaihi underlined the Information Affairs Ministry’s keenness to provide a comprehensive and outstanding media coverage of the 2022 F1 Gulf Air Bahrain Grand Prix, as well as highlight the action-packed programmes held on the sidelines of the event, through direct radio and television shows and interviews, in addition to reports.

He pointed out that the success of the F1 Bahrain Grand Prix has, over the years, contributed to making the kingdom the focus of the world’s attention, enhancing its sports, tourism and media gains and confirming Bahrain’s distinguished ability to host mega international events.

The minister affirmed that the kingdom continues to reap the fruits of the pioneering project, BIC, which had started in 2004 thanks to the support and follow-up of His Royal Highness Prince Salman bin Hamad Al Khalifa, the Crown Prince and Prime Minister, citing the positive impacts of the Bahrain F1 Grand Prix on the aviation industry, transportation and tourism, as well as its contributions to increasing the development gains attained by the kingdom during the prosperous era of His Majesty King Hamad bin Isa Al Khalifa.