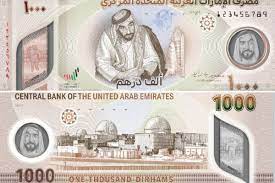 The Central Bank of the UAE (CBUAE) has launched a new banknote of Dh1,000 denomination to mark the 51st UAE National Day.
The note is made of polymer and uses new designs and advanced security features.

The front depicts former president and founder of the UAE, Sheikh Zayed bin Sultan Al Nahyan. The image is situated next to that of a space shuttle. According to CBUAE, this design was inspired by a meeting between Sheikh Zayed and the pioneers of Nasa all the way back in 1976. This expresses the ambitions of the founder to position the UAE at the forefront when it comes to space exploration. To the left of Sheikh Zayed’s image are the words ‘Emirates Mission to Explore Mars – the Hope Probe’, referring to the journey made in 2021.

An image of an astronaut acts as a security mark and appears on both sides of the banknote, representing the first Emirati astronaut to reach space.

The back of the note depicts another global achievement for the UAE – the Barakah Nuclear Energy Plant in Abu Dhabi. An image of the plant adorns the back side of the note, celebrating the UAE’s keenness in diversifying energy sources and reducing carbon emissions.

Keeping in line with CBUAE’s efforts to adopt sustainable practices, the note is made of recyclable polymer material. These notes are more durable than traditional paper banknotes as well, hence they last longer in circulation.

The colour characteristics of the note remain the same as the other note of the same denomination, so as to make it easy to identify. It features different shades of brown, in addition to fluorescent blue marks of the UAE nation brand in the centre, and drawings and inscriptions created using advanced intaglio printing techniques.

CBUAE is the first in GCC and Mena regions to issue the largest multi-coloured KINEGRAM® surface applied foil stripe in the new banknote issue. This is done to combat counterfeiting.

Prominent symbols have been added in Braille to help blind and visually impaired consumers identify the banknote’s value.

The new banknote will be available in Central Bank branches and ATMs in the first half of 2023. The current Dh1,000 note will continue to be in circulation.

Khaled Mohamed Balama, Governor of the CBUAE, said: “The issuance of the new Dh1,000 banknote comes under the vision of UAE’s President His Highness Sheikh Mohamed bin Zayed Al Nahyan, to keep-up with the comprehensive development our country is witnessing, and represent UAE’s global achievements and successes, as well as highlight its future ambitions in various sectors.”

He added: “We work in accordance with the vision of our wise leadership, and the directives of Sheikh Mansour bin Zayed Al Nahyan, Deputy Prime Minister, Minister of the Presidential Court, and Chairman of the CBUAE Board of Directors, in transforming strategic plans, businesses and various projects into reality. This comes in line with our aim to develop the financial sector in the country, and realise CBUAE’s vision to be among the top central banks globally in promoting monetary and financial stability, supporting the UAE’s competitiveness and to boost the dirham’s position as an international currency.”