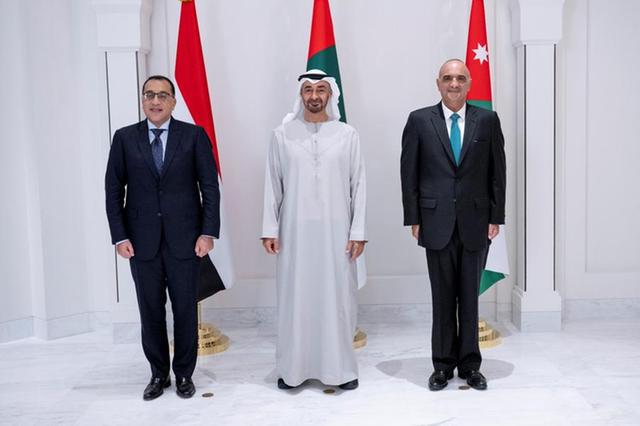 President His Highness Sheikh Mohamed bin Zayed Al Nahyan received today, Jordanian Prime Minister Bisher al-Khasawneh and Egyptian Prime Minister Mostafa Madbouly, who are currently visiting the UAE to sign ”Industrial partnership for Sustainable Economic Growth” among the UAE, Jordan and Egypt that its details will be announced on Sunday.

During the meeting, held at Al Shati Palace, His Highness Sheikh Mohamed bin Zayed welcomed the prime ministers of Jordan and Egypt and asked them to convey his greetings to King Abdullah II of Jordan and President Abdel Fattah el-Sisi of Egypt, wishing further progress and prosperity for Jordan and Egypt.

UAE President hailed the Industrial partnership for Sustainable Economic Growth and stressed that this is a pioneering step for the benefit of the three peoples.

Sheikh Mohamed bin Zayed pointed out that the changes taking place globally call for enhancing economic partnerships among the countries of the Arab region, innovating new formulas for cooperation among them, enhancing their integration, investing the qualitative advantages of each country to achieve sustainable development, strengthen the response to common challenges and global crises, and expanding self-reliance, especially in vital sectors related to national security such as food, health, energy, industry and others.

In turn, prime ministers of Jordan and Egypt expressed their happiness at meeting Sheikh Mohamed bin Zayed and reciprocated the greetings of the Jordanian monarch and the Egyptian President and their best wishes for good health and happiness.

They also emphasised their countries’ desire to make the Industrial partnership for Sustainable Economic Growth achieve its desired goals.