We look to the future with confidence: UAE President shares message after National Day celebration 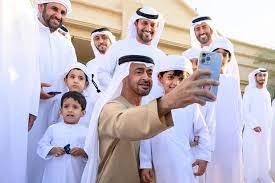 The President of the UAE , His Highness Sheikh Mohamed bin Zayed Al Nahyan, took to social media on Friday to express his joy at joining the Rulers of the Emirates at the official National Day celebration while reflecting on the country’s achievements.

“I was honoured to join my brothers the Rulers of the Emirates for our nation’s 51st UAE National Day celebrations,” Sheikh Mohamed tweeted.

“On this day, we reflect on the achievements of our past and look to the future with confidence and determination. May God continue to protect the UAE and its people,” he added.